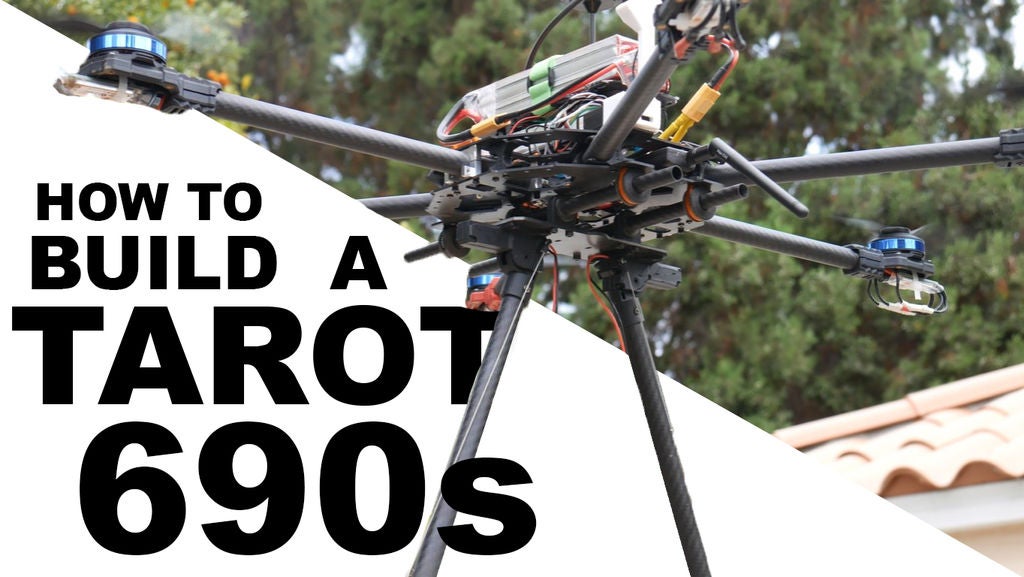 Step 1: Assemble Frame
The first part of the build was to assemble the frame of the Tarot 690s. Luckily the frame came with instructions, however, they were not in English so they were useless...
​
On the plus side, the assembly was very easy and didn't need any instructions. The build consisted of assembling the main frame, then pushing the arms into the main frame and sandwiching them together. After tightening, make sure that the arms can still be opened or closed into the locking position. Also dont forget to use thread locker! You dont want your multirotor falling out of the sky! It's happened before, and dont ask me how I learned my lesson. Once all your screws are in place make sure the arms and the base is level, or else it can lead to major problems down the road. After the frame was assembled, I removed the stock landing gear to be replaced with some retractable landing gear. That just slid over the mounting arms underneath.


Next it was time to add on the motors. To do this, unscrew the carbon fiber plate on each arm and mount the motor to the plate. Again, don't forget to use locktite or thread locker! When mounting the motor to the plate, screw the screws in a star shaped pattern if possible, this will evenly distribute the force and help to make sure nothing breaks. Once all 6 motors were mounted, install the carbon fiber plate/motor back onto each arm.
​
​Step 3: Mount ESC's


Next it was time to mount the ESC's. To do this I used some zipties and fed them right under the motor mounts, then trimmed the excess. This way the ESC's will get active cooling from the props and the signal doesn't have to travel as far.
Once all 6 esc's were mounted, it was time to break out the soldering iron and get to work!
Step 4: Connect Motor to ESC


Next its time to connect the motors to the esc's. Start by stripping a considerable amount insulation off the escs motor leads. Next I used some helping hands to hold a male bullet connector in place while I soldered the esc lead to the connector. Remember to head the connector and wire, rather than the actual solder itself. Once that was done I slid some heat shrink tubing over the connector and shrunk it using a lighter. Repeated that for all three wires of the ESC, and then did that 5 more times for each arm. For the Motor leads, I did the exact same thing, except this time using female bullet connectors. And then again, repeating for all 6 arms.
Once that was done, I plugged in the leads (order doesn't matter for now) and went to the next step.
Step 5: Power Distribution Board


Next it was time to assemble the "heart" of the multirotor. This is where all the electricity will be flowing through and energizing the board, so its essential to order a good high quality PDB. To start, I soldered a XT60 Connector to the battery input and used some heat shrink to seal the leads. I then installed the PDB using nylon nuts and bolts in the center of the frame.
The next step was the worst part of the entire build. What you have to do is push the power leads of the ESC and the signal wires through the arms of the hexacopter. The tight space was quite difficult but in the end, what you should have coming out of each arm is two signal wires, and two power leads which should be soldered to the PDB
Step 6: Mount Flight Controller


If the PDB was the heart of the multirotor, the flight controller is essentially the brain. I attached the FC to the anti vibration mount that came with it using double sided foam sticky tape. I then used nylon nuts and bolts to assemble the flight controller to the frame.
Its important to note the arrow on the flight controller (Bottom center first picture). This arrow points to the front of the hexacopter (the two red arms). Make sure its pointed in the right direction or it will act crazy!
Step 7: Add on the Toys!


Now its time to add all the peripheral gadgets and whatnot's. This step is the most important, however the easiest since everything is labled for you.
The only add on you really need is the receiver.
I used a l9r for long range telemetry and using a 3d printer, printed a mount for the receiver that I got on thingiverse.
Next I mounted the gps mount onto the frame, peeled off the sticker and stuck on the gps. Again make note of the arrow and point it towards the front of the multirotor. Next I plugged in the compass and battery monitor into the assigned slots on the flight controller.
The next step was to plug in the ESC signal wires. Make sure to orient the motors from 1-8 as stated by mission planner, and plug the leads into the correct slots of the Main Out section on the flight controller. I found that using tweezers helps alot in the tight spots.
Step 8: Last Minute Checks!


While nearing the finish line everything gets a little bit easier! Now that the majority of the actual hardware building is complete, its time to start on the software. Flash the FC with the latest version on mission planner and connect using a USB cord. Then go through the required steps to setup the hexacopter. Now the reason im not going to go too in depth here, is because theres so many tutorials on this part, that another would just be too repetitive and alot to write. The steps are pretty self explanatory and the instructions are on screen. The best tutorial ive seen is from Painless 360 and his 5 series YouTube playlist on pixhawk and mission planner.
During the motor test portion of the install, make sure all your motors are spinning the correct direction, if not switch any two of the three motor and esc leads with the bullet connectors for that arm.
I then installed the props for the arms, being sure to separate the clockwise and counterclockwise arms. I then bound the receiver to my taranis, and plugged in a battery to maiden the multirotor.
Step 9: Takeoff!


And there you go!
Your multirotor should be in the air! Now just add a gimbal and a camera to get those buttery smooth aerial shots you see all over YouTube. Be sure to be careful when flying this!